Fidelity: Unlike dome diaphragms, annular ring diaphragms feature wings that are smaller than the wavelengths they reproduce. The diaphragms move in phase, creating far less audible and measurable intermodulation distortion than speakers equipped with traditional drivers, especially at high frequencies.

At the heart of the APS is a patented 9” Dual Diaphragm 20° Curved wave driver.

The patented design is a result of extensive, dedicated research and development providing dramatic improvement in dynamic response, clarity and transparency. 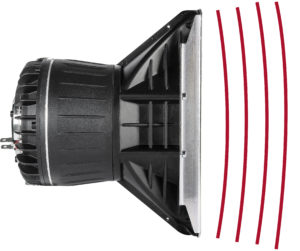 At the heart of N-APS is a string of patented technologies, the unique RDC (Ring Diaphragm Curved wave driver) – similar to CODA’s planar wave driver, but with a bit of a twist, in that the wavefront is curved at 20°. This ultimately means there is less distortion, and no reshaping is required, so it offers extraordinary sonic precision.

As a result, when you put more N-APS together, they perform as one single cabinet, with no interference whatsoever.